The most interesting part of creating something, for me, has to be the journey of figuring out what it is. Some ideas come out fully formed and others change and morph over time so that only a semblance of where it began remains. The Society of Curious Creatures is a project that I think more and more will have an interesting life. Just when I think I may have to abandon this project, another piece of the puzzle falls into place and things start to morph and change.

Enter the mini cab. This is a miniature version of the larger cabinets I have made in the past but with a few more elements. I’ve been struggling to figure out a way to link a lot of these ideas I have about what is part of this world and starting this “mini cab” helped me figure a lot of that out. When painter’s embark upon larger works they tend to do a lot of small paint studies or drawings that will help them figure out a number of things about the larger work. This was exactly the same thing only dimensionally for me. 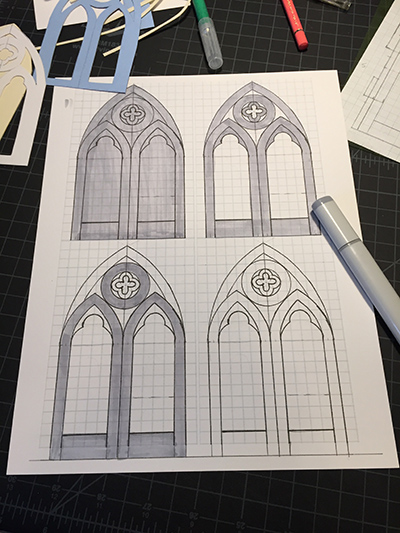 Figuring out the door layers and the scale. 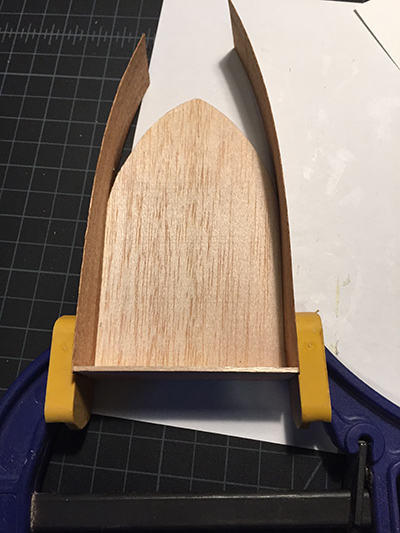 Starting to build the shape of the main part of the cabinet. 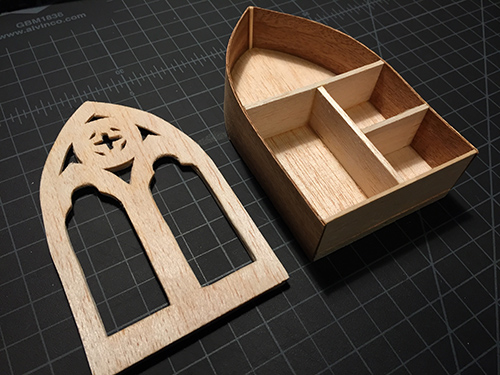 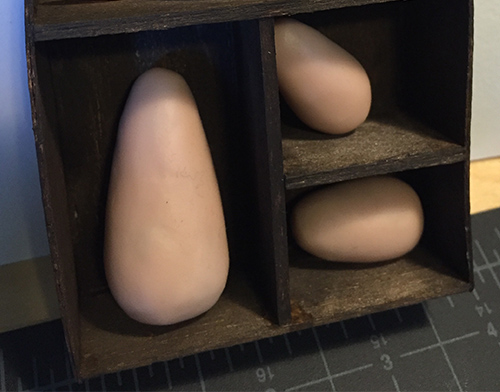 Trying out the placement of the egg collection. 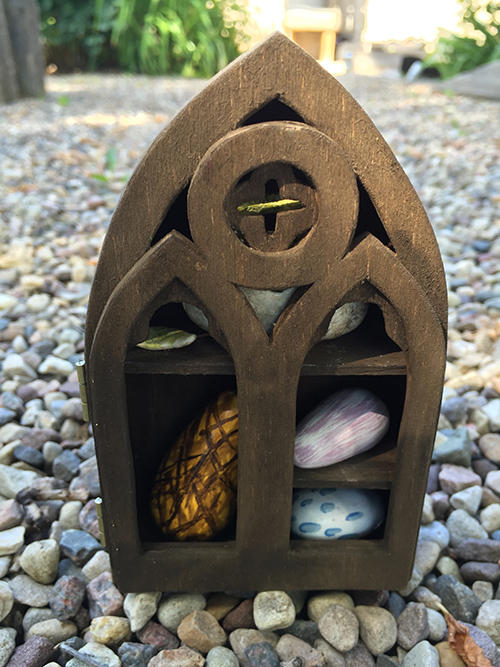 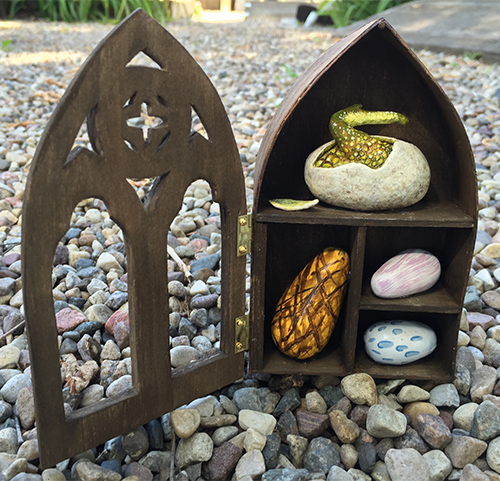 Door has working hinges and a surprise growing within.

It’s finally here! The second edition of my creature card series is finished and ready to go out into the world to find new homes. Thank you to everyone who bought cards in series one. It was fantastic to be able to sellout the first series at this years ArtWalk and I’m very pleased to be making another set.

This time around I’ve increased the number of images in the set from 3 to 5 and I’ve made the edition slightly larger at 30. For those of you that may not know this is a limited edition 4″x 6″ card set. Once all thirty are sold I’m not printing anymore. Each set is signed and numbered and comes with a small info card about the creatures featured. The new set introduces three new creatures that some may have already met this summer and fall when my work was on display at the Whyte Ave ArtWalk or the Kaleido Family Arts Festival.

Please say hello to the Fuzefly. An odd looking insect that seems to be morphing into the trash it collects. The Nudilichen. A tiny species both colourful and cute that lives in mosses and lichen across the globe and finally the Orchesia fish. A skittish fish often referred to as the orchid of the sea.

Where could I buy this set you ask? Well you can contact me at info@angiesot.com or head on over to my Big Cartel Webstore and make a purchase there. Collect them, trade them or give them as gifts. 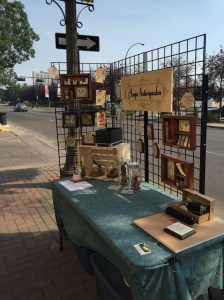 I’m Alive! Earlier this month I decided to embark upon a new adventure in the world of what to do with my Curious Creature characters. So I took them to the street! 🙂 It was an long thought about idea to do a booth at the Whyte Avenue Art Walk and I’m happy to say it was a good one. It was a super scary idea to go stand out there and let people see what I’ve been up to, but it was a really positive experience. I never expected to enjoy the look on peoples faces as much as I did when they would be walking by and then stop and do a double take as if to wonder “what the heck is this?” Other than all the feedback, I sold a few of my larger peices to people who I think are really gonna enjoy these odd little guys starring back at them everyday. I also sold out my Series 1 Creature Card Series so now I get to embark on Series 2!  What more could I really hope for? 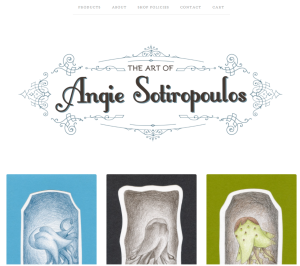 What’s this about “new things”. Well after a much needed week of decompressing from the event I am full of ideas of what to get up to next. To start, I’m trying out a new online shop to sell some of my easier to ship pieces. It’s with Big Cartel and I’m pretty excited to see how it all works out. Best part is I can list my items in Canadian dollars! I’m listing some of the coloured pencil creature drawings that didn’t sell from Art Walk first. It’s not many so I’m going to rotate them about. This week it’s all about the Hifishcus.

What is the Hifishcus? Well it’s thought to be a hibiscus jellyfish hybrid. Rarely seen, they are thought to live down in the depths of the ocean. Once a year you can maybe catch a glimpse of them as they all float to the surface to find mates. Glowing in the dark waters off the coast. As quickly as the sun sets so too is their brief appearance on the surface. Then back down they go hiding themselves away in the dark from prying eyes.

Ooo, ahh.  In a couple weeks their enemy the Heliconia is hot on their trail. 🙂 I’ve started out with a small account to see how this will be received but my hope is to post a new drawing ever other week or so to add some new work to the mix. Click here and check it out.

Last of the bunch. 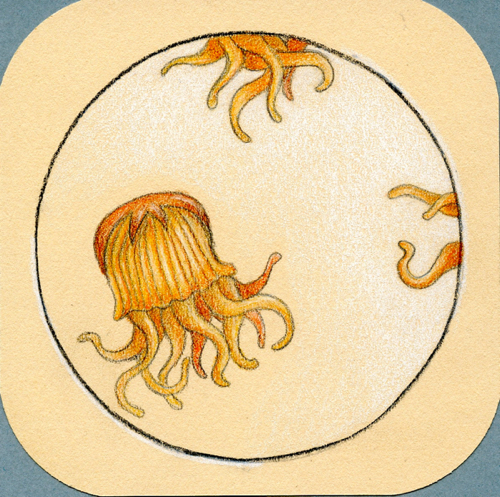 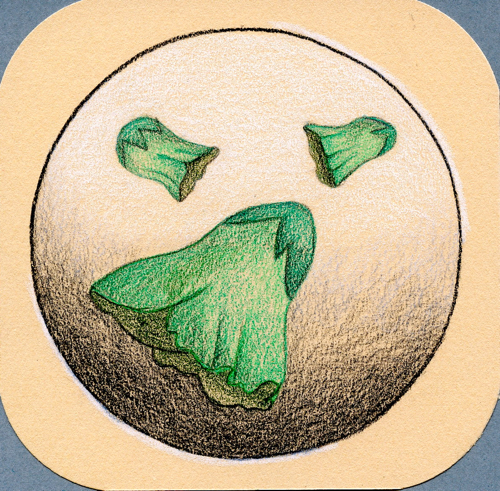 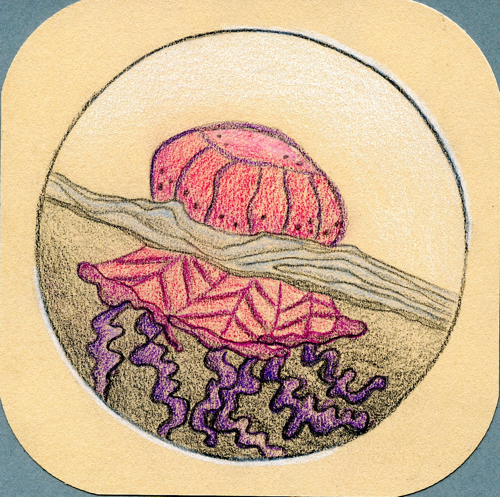 More of the 4×4 creature drawings.

As I figure out what my goals will be for this year, I have been doing some small 4″ x 4″ drawings with my Curious Creature characters. I’ve been playing with paper types and colour combos. One thing I do know is that I’m ready to expand and add a few creatures to the  world. Here are some of the experiments. 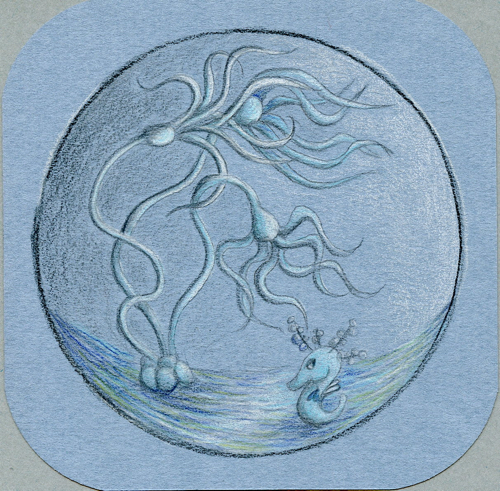 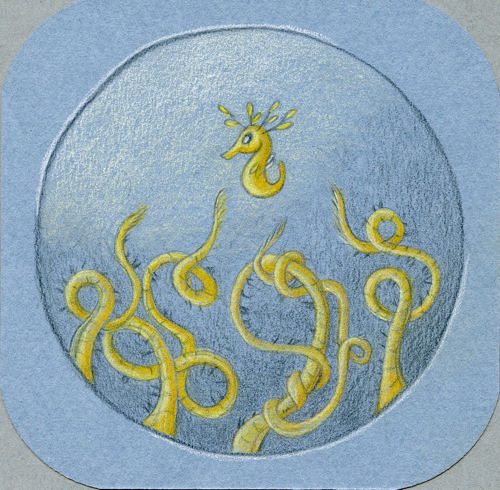 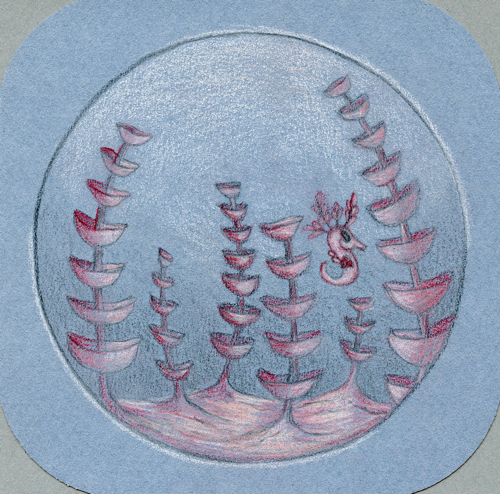 I’m really drawn to these one off art things for some reason. Maybe because their random and allow me to procrastinate from things I “should be doing”.

Enter Light Grey Art Lab. They had an artist art swap taking place before Christmas. Thinking this would be a great way to connect with a random artist in another city, into the hat my name was entered. A few days later an email appeared with a listing of all the partnered up people.

It work out that I was paired up with another Canadian woman. Her name is Jill Bogart and she does some really lovely illustrations. I especially love her Spoonflower patterns. Do check her out if you have a chance.

Now to the exchange! I have been itching to make some movable art pieces for awhile now and inspiration struck. My little Ave Paradisus character that I love to draw is always up to mischief so why not a trip across Canada to deliver a message. 🙂 Below is the work in it’s “closed” state and then after you run the tab with the starfish on it up…behold a holiday message 🙂 It was really too much fun.

So what did she send me you ask? Well… a whole lot of awesome that’s what.

She had been making felt ornaments as gifts for people and she made me my very own felted Curious Creature! The same critter that I sent to her. Coincidence? YES, because neither of us new what we were sending each other. They came with a couple of great “backgrounds” that are prints of some of the patterns she sells in her Spoonflower shop. Check out the stuff she sent below.

This was a super fun swap. Hoping I get to do it again next year. 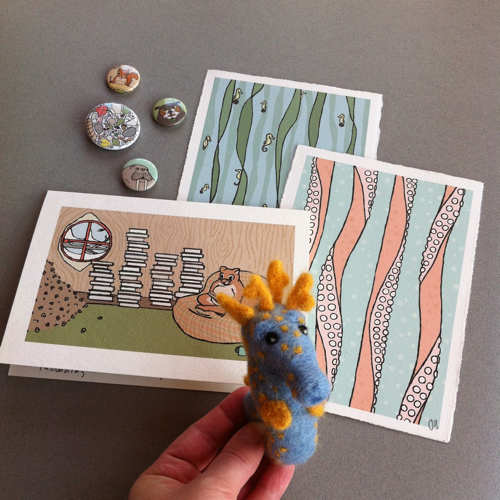 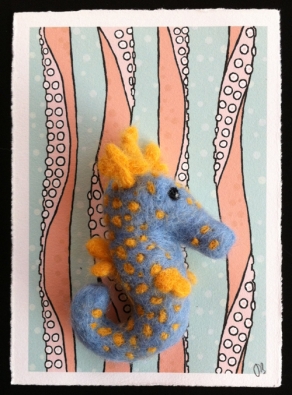 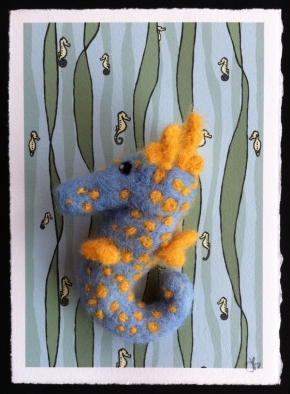 If you haven’t noticed I have added a new icon to the side bar. It’s my new web store and it OPENS TODAY! This year has been about having the courage to work towards ideas I’ve had for a long time but for one reason or another have never followed through on. So here we go! 🙂 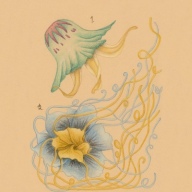 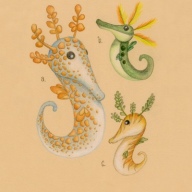 With the Curiosity Cabinets and Kaleido Festival as a vehicle for introducing my Curious Creatures  Series, I am opening a web store that will feature these creatures in a limited edition postcard set. It’s a small run with only 15 sets available. I’m calling it Series 1 in hopes that I can release more ( different) collectible sets in the future. This set of creatures is ocean based but I have ideas for land and and sky creatures to come. This site will also be a forum to offer original drawings and paintings from not only my Curious Creature Series but some of my other work as well.

Head on over to my website and check out more info on the Society Of Curious Creatures or better yet head on over to the Store and pick yourself up a set of cards. 🙂