Here’s a fun little side project for a friend. My spouse is an amazing artist in his own right. He makes these beautiful cigar box instruments. The necks, knobs and finishing details are all hand carved and painted. They are also all playable. He’s made everything from guitars, ukeleles and banjos. He’s also been known to dabble in making speaker cabinets and effects pedals as well. It’s really quite awesome stuff. Have a pop over to his site and check his stuff out. bobbysmale.com

What does this all have to do with me you ask? Well a musician friend of ours is preforming in a theatrical comedy show called One Man Two Governors. He plays a part in this awesome Skiffle band that is part of the show. He purchased one of Bobby’s creations to play in the show and managed to talk him into building a custom case for it. Not something he usually does but he’s a good friend. Wanting to add a little something special we decided to paint the instruments name on the case for an added personalization. So fun letting project for Angie! Yay! Here’s the finished product with the maker’s mark in gold below.

For those that don’t know, my job is working as a Props Artisan and Scenic Painter. It’s been awhile since I’ve had any posts related to this so here it is. This is a VERY brief showing of some of the objects I have been working on for the last little while. Now that all the shows have Opened I can show you a few details.  I had fun working on them all, but balance is a hard thing to achieve at times in this business. It can take awhile sometimes to recover from the intensity. This is also why it’s taken me some time to go back into it all and pull out a few photos to post. Distance gives clarity. 🙂 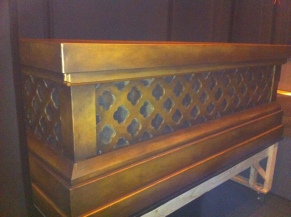 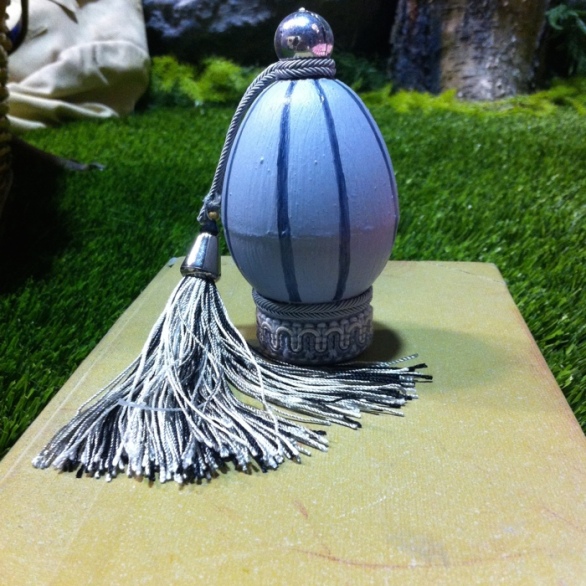 Shrek of The Rocks and Signs

Often the jobs I get hired for in the theatre world aren’t always to see things through from beginning to end. Sometimes its about coming in to help get a lot of objects prepped and ready for paint.

One company I love working for is the Children’s Theatre in St. Albert. Mostly because I love working on children’s shows. They’re shows are always a lot of fun. This year it’s Shrek.

For those that are unfamiliar (because of a life recently spent under rock 🙂 ) it is a musical based on the Dreamwork’s movie of the same name. My concerns were castles, trees and LOTS of rocks. Most theatre companies don’t have tonnes of money so many times a small crew of people will follow the work beginning to end with the occasional addition of a body or two to help move large chunks of work along. That’s me…the occasional body.

Here is a few shots of the process and a simple description of what goes into taking a cube of styrofoam and turning into a rock ready for the stage.

Carved block of foam. This needed to be used as a seat and carried around. It’s function ended up dictating a lot of it’s shape.

Scrimed rock. This means I’ve covered the rock in a cheese cloth and contact cement. It’s important to do this or the paint won’t stick to the foam and flake off as it get handled.

Primed rock. It’s painted in a lovely grey awaiting to be given it’s final paint treatment.

Here’s how some of our castle pieces were finished . Similar to our rock process. They are about 12″ square. 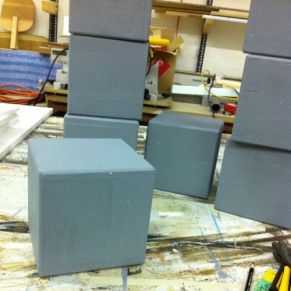 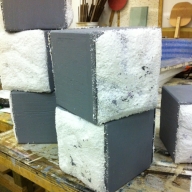 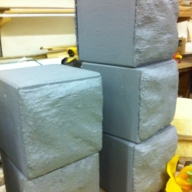 There were many rocks of varying sizes. Some were large, others small and others yet protruding from (and around) parts of the set. It wasn’t all rocks though. Even if it did feel like it some days. There were also a number of tree stumps and castle walls to switch things up a bit.

In the midst of all this prep there was time for a fun little project. A number of  hand held picket signs and a some road marker signs. They varied in size from about  18″ x 10″ for the road markers and 2′ x 2.5′ for the picket signs. Some were smaller or more elongated. Here’s a few.

Each time I work for this company the tasks are different. Some rate higher on the fun meter than other’s, but I don’t mind. It’s nice every now and again to get projects that just let you find a zen and just go on repeat.

The Geometry Of Aladdin 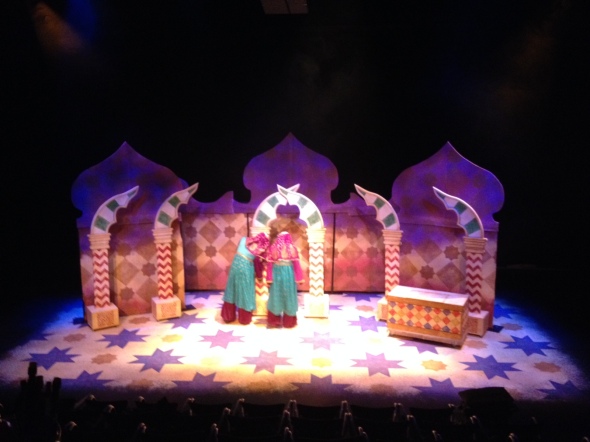 It seems that in the part of world where I am scenic drop painting isn’t something that happens very often. Not sure if it’s the cost, modern printing can be so affordable these days, or it’s not “trendy”, heck maybe it’s just plain hard to find people that do it anymore! Whatever the case, when Alberta Opera decided to do Aladdin for their touring production this year AND it was going to be mostly made of scenic drops I jumped at the chance when I was asked if I was available to work on it.

It was a lot of fun and I think it turned out pretty nice. The real hard part came in making the geometric shapes line up with varying pieces of fabric that all overlapped to hide the structure holding it up. Many graph paper drawings later and some stencil making yielded me some great results.

As always I like posting progress shots. Some of the shots are from my iPhone and others are form my camera I brought in a few days later. Boy what a difference in picture colour! 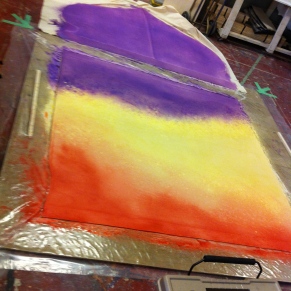 In addition to all the drop work, there was also a request for a floor to painted as well. Normally this company does not do a painted floor but this time around they were looking to do something a little different. So more geometry, graph paper and stencils later… 🙂 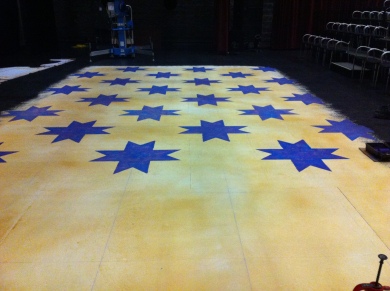 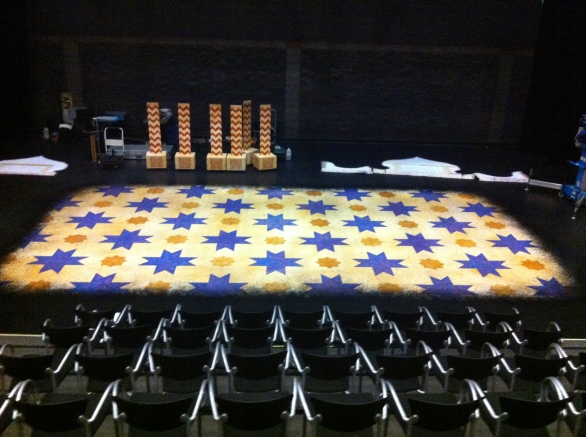